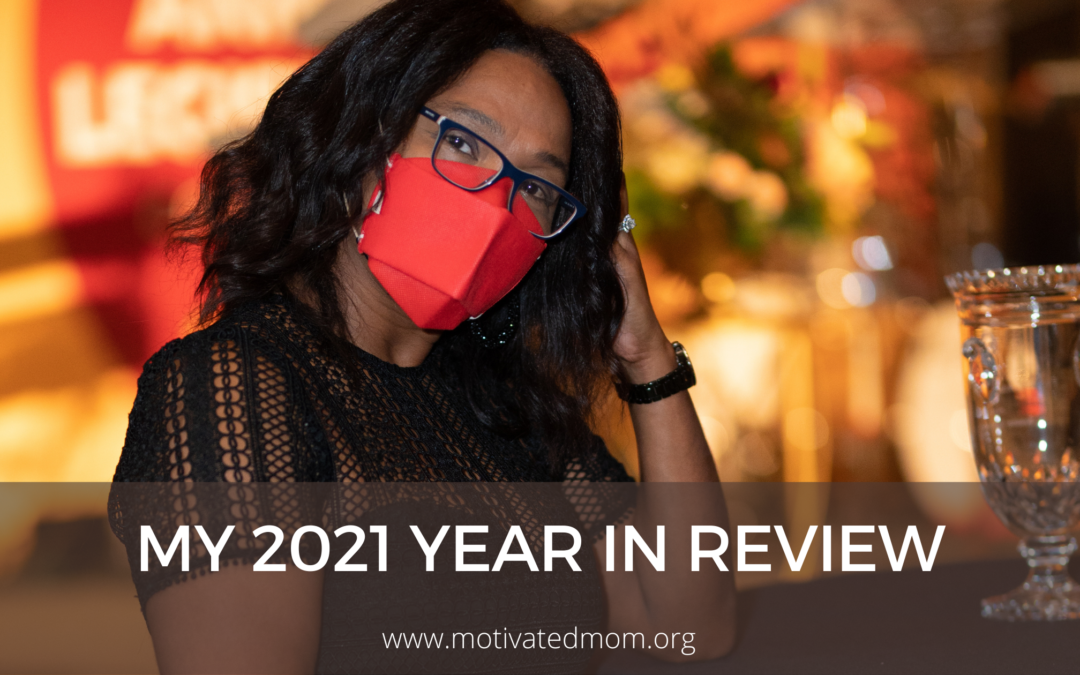 Welp, here’s to my 2021 year in review!  Like so many others, 2021 was a different and somewhat difficult year. At the top of the year there was so much going on, I didn’t even write a year in review for 2020 because that was just alarming.  Now as the year comes to an end, I have had a chance to deal with the traumatic experiences for both years. Therefore I am more cable of writing my 2021 year in review, as I plan for 2022.
At the end of 2020 a few things happened that heavily impacted 2021 for me. In November of 2020 one of my dads died of covid. As traumatic as that was, his death brought about a lot of questions. The main question being “who’s my dad”? In December I learned that my other dad that I believed was my real dad, was not my dad.  I know, a lot right? Well now we can jump right into my 2021 year in review.

MY YEAR IN REVIEW 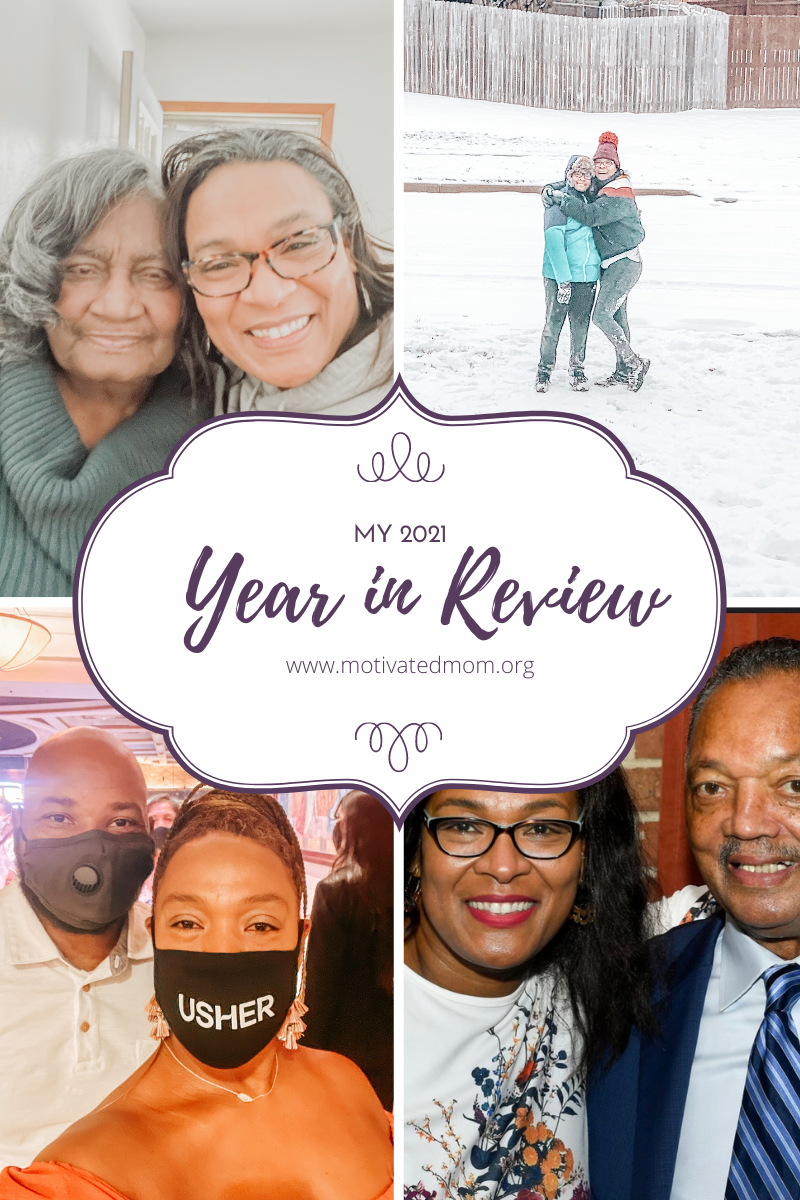 At the time, I thought January was the toughest month of the year. Early January I got the results from my dad that died and learned that he was not my dad either. Boy was I hurt, lost, and pissed. It was longest month ever. I can’t even remember doing other than trying to get to bottom of my new situation. 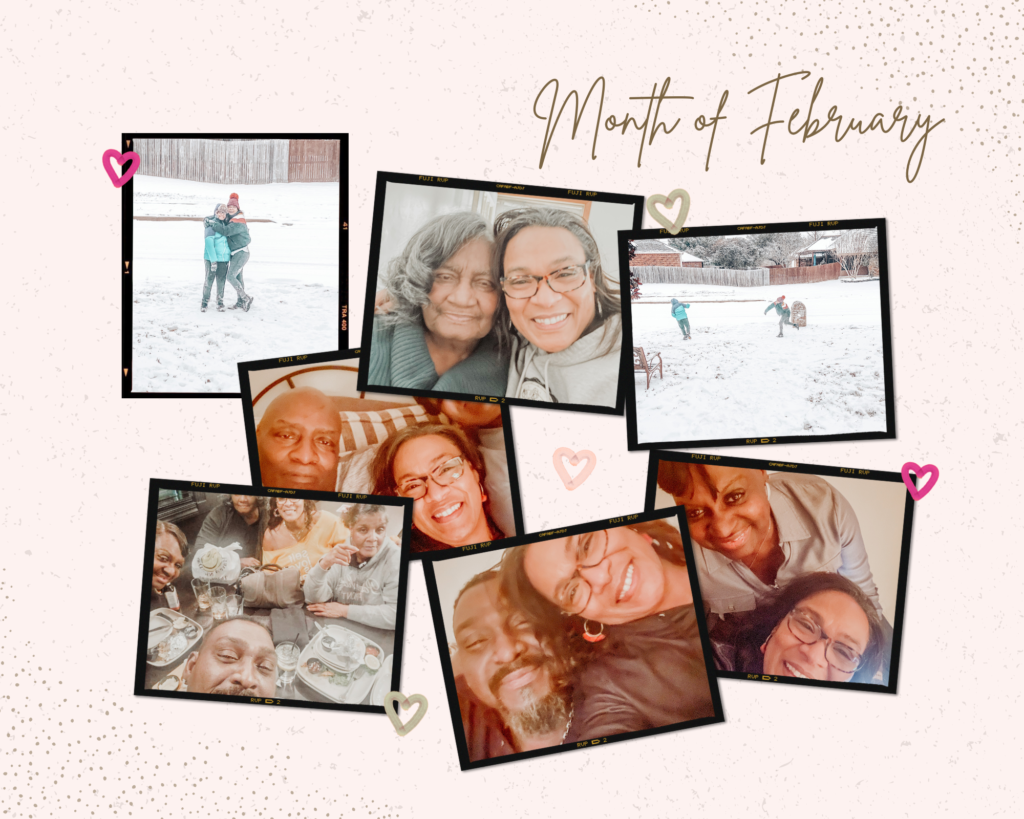 I have to say February even tougher. While my birthday is in February, so is the anniversary of my grandmother’s death. I was really struggling. Well, it was bitter sweet in hindsight. So, early February I learned who my biological dad was thanks to my mom and ancestry. Yup, it was overwhelming to say the least. It was just a day or so after I launched Melanin Moms Media and a few days before my birthday. We had a hugs snow storm in Texas, and Chance and I played in it.  I had a long conversation with my bio dads family. Later that month I went to Illinois to visit them and celebrated my other dads birthday. Turns out, my grandmothers were best friends. It was unbelievable I cried so much. It was heavy. 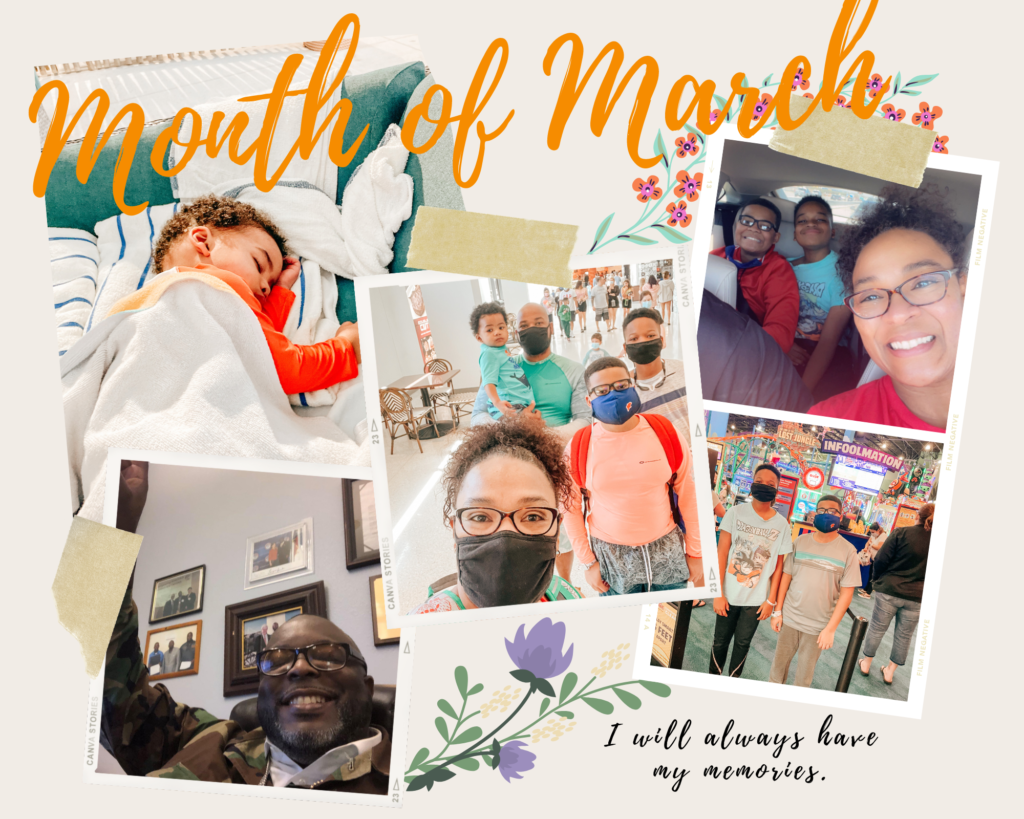 March was interesting as I dealt with all of the emotions and feelings. I lost a dear brother-friend to complications from COVID, it was tough.  However, I kept going trying to be wife and mom and keep my life moving. We planned a short spring break trip to newly opened Kalahari Resort in Austin. Chance needed a break. He had been homeschooling since March 2020. Actually we all needed it. 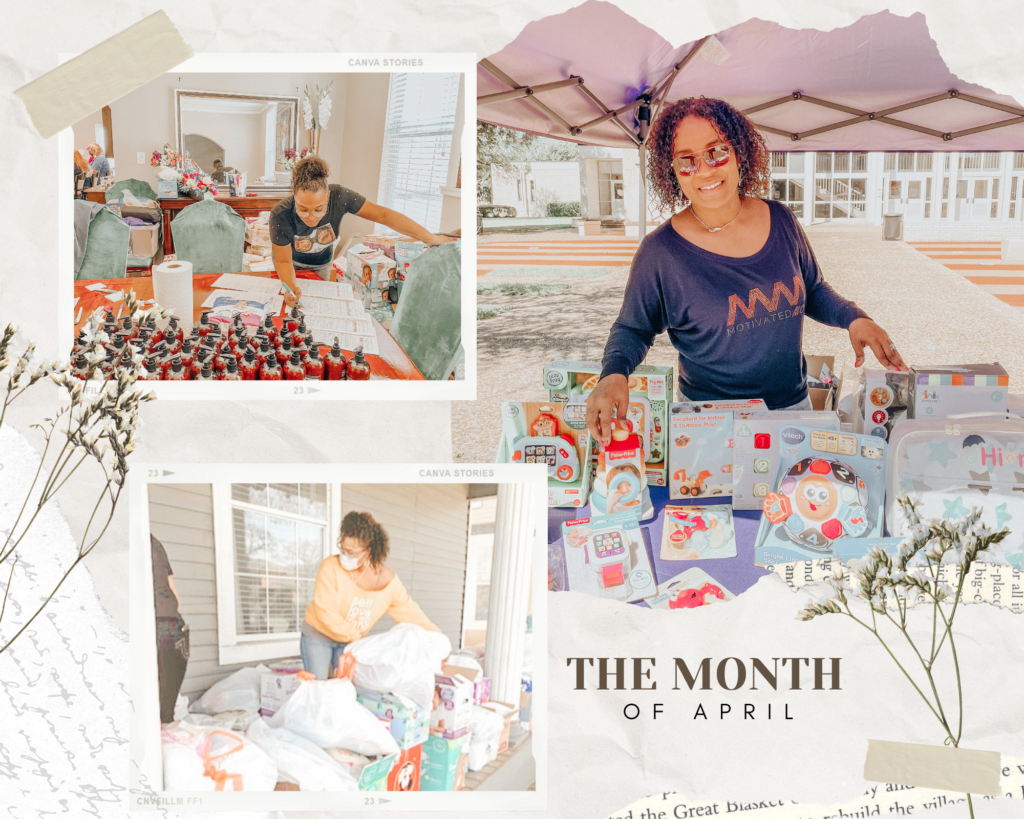 April was a lot of the same. However I did talk with bio sister, we started developing a friendship. It was tough but I learned so much about her. Our lives were so similar in a lot of ways…and neither of us knew our dad. He died when I was 4 and she was like 2. It was my third month serving hundreds of moms with Viola’s House, I was providing early education toys on behalf of A Chance to learn and Motivated Mom.  I also had a productive meeting with a major brand. It proved to be a month of clarity. 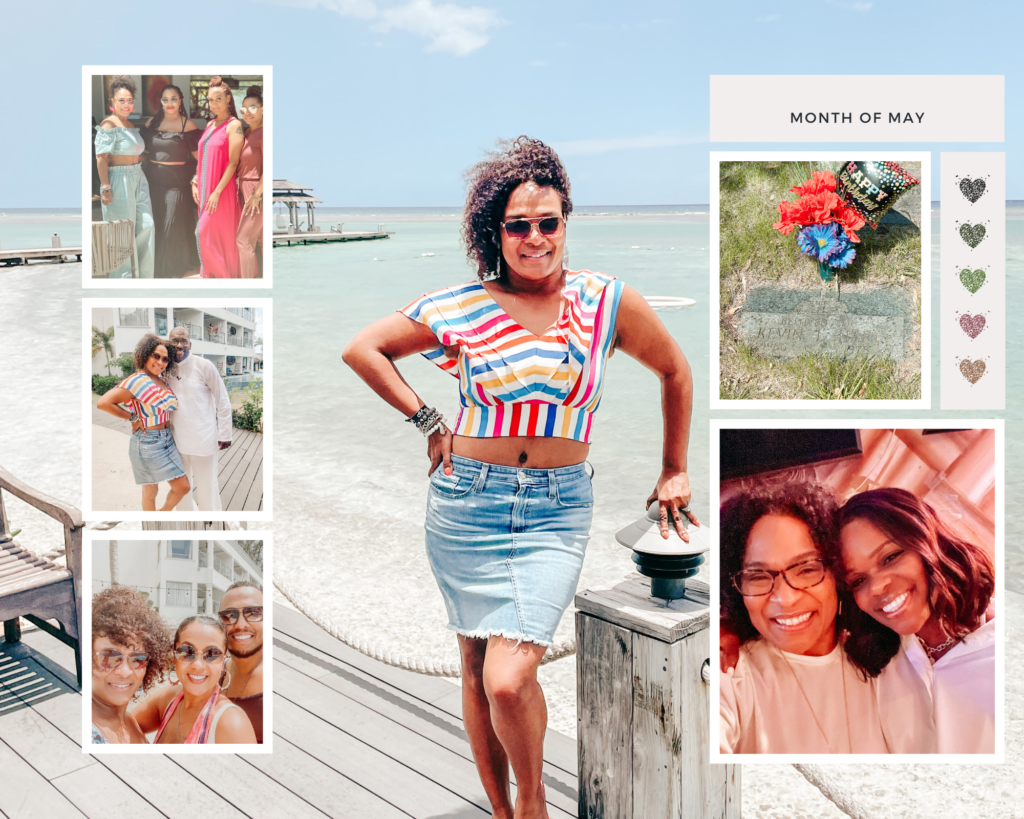 May was the beginning of my healing process. I met my bio sister, visited my dad’s gravesite, threw my cousin daughter a baby shower, and attended a wellness retreat in Jamaica.  I felt as if I was starting a new chapter. 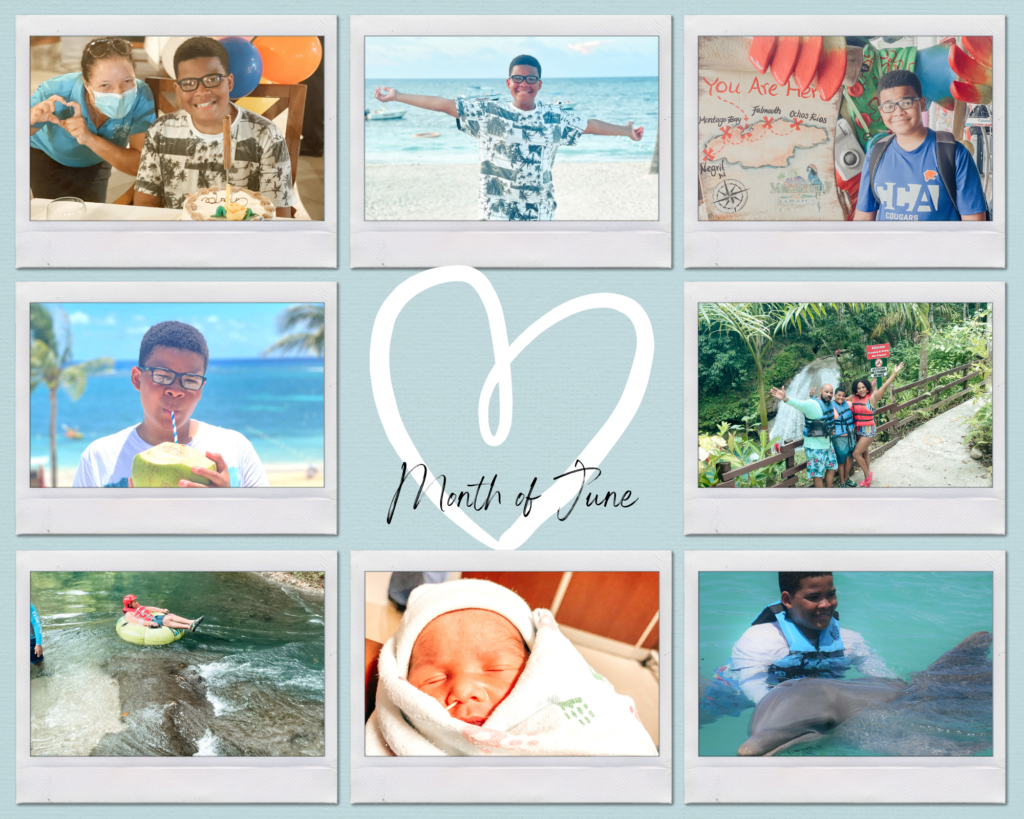 June brought even more clarity. We were able to go on our family vacation to Beaches Ocho Rios. It was a great family trip for us.  A few weeks later, Nadia my cousin daughter had my little angel face Aubree Rae…and I was there for it! 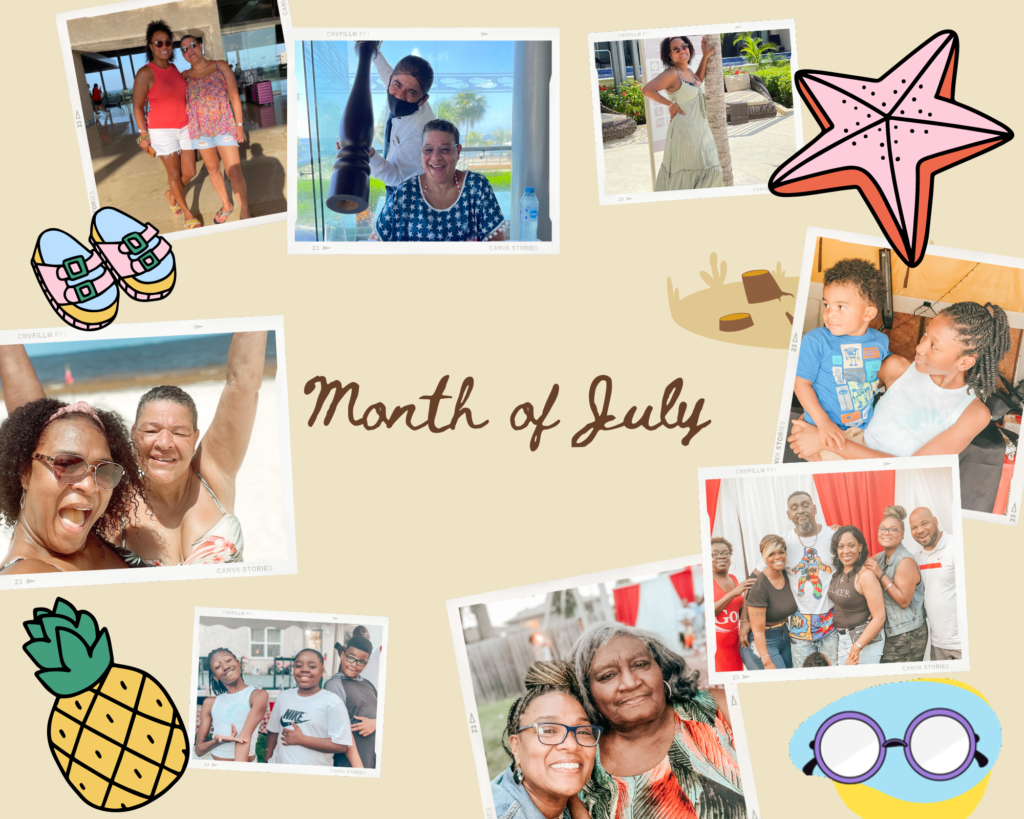 I kicked off the month of July in Mexico celebrating my moms birthday. It was our first mother-daughter trip. We had a blast. Later that month my family and attended my bio dads annual Woodard Family Picnic. I was nervous for son, it was a lot for me but even harder for him to understand. In the end, it was amazing. 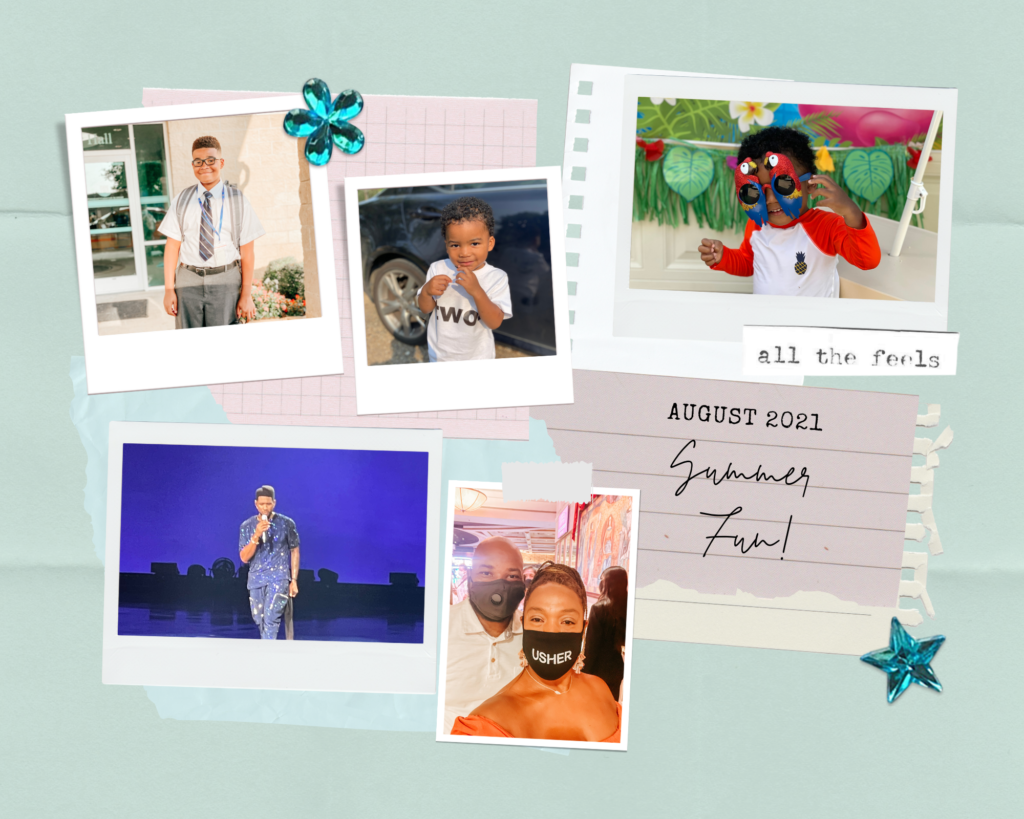 August was BUSY. We kicked it off with a pool party celebrating Elijah’s 2nd birthday – it was a blast!  Chance started school in person and it was a lot. He was excited and I was still a bit nervous. However we believed that he would be okay and he started 7th grade. My hubby and I went on a date to Vega to see Usher, that date made my whole year!  Later that month I started as Head of Marketing and Communications for a local school. 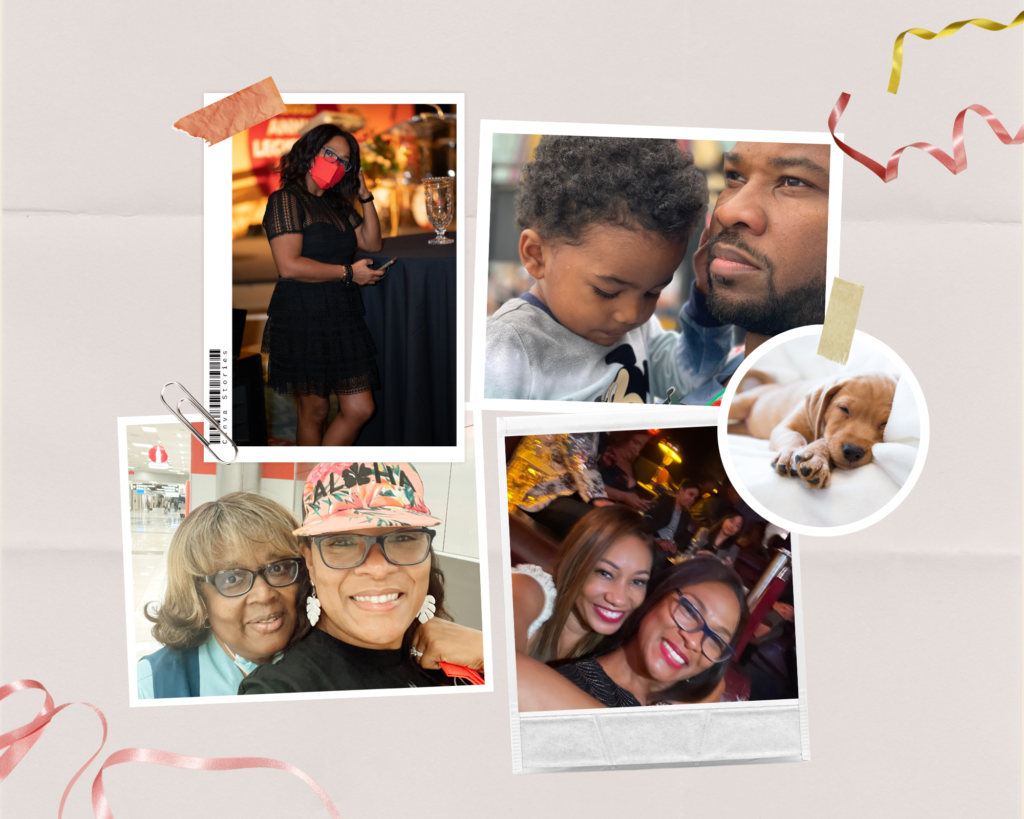 Another busy month. Unfortunately, due to the rise in covid cases I had to cancel the Motivated Mom Retreat again. But we did celebrate my hubby’s birthday and I worked with CMG on Harlem Fashion Row. I worked on designing windows for HFR, Banana Republic, and Stitch Fix. It was awesome. Later that month I got to work on the Georgia Legislative Black Caucus Conference. I closed out the month tired. 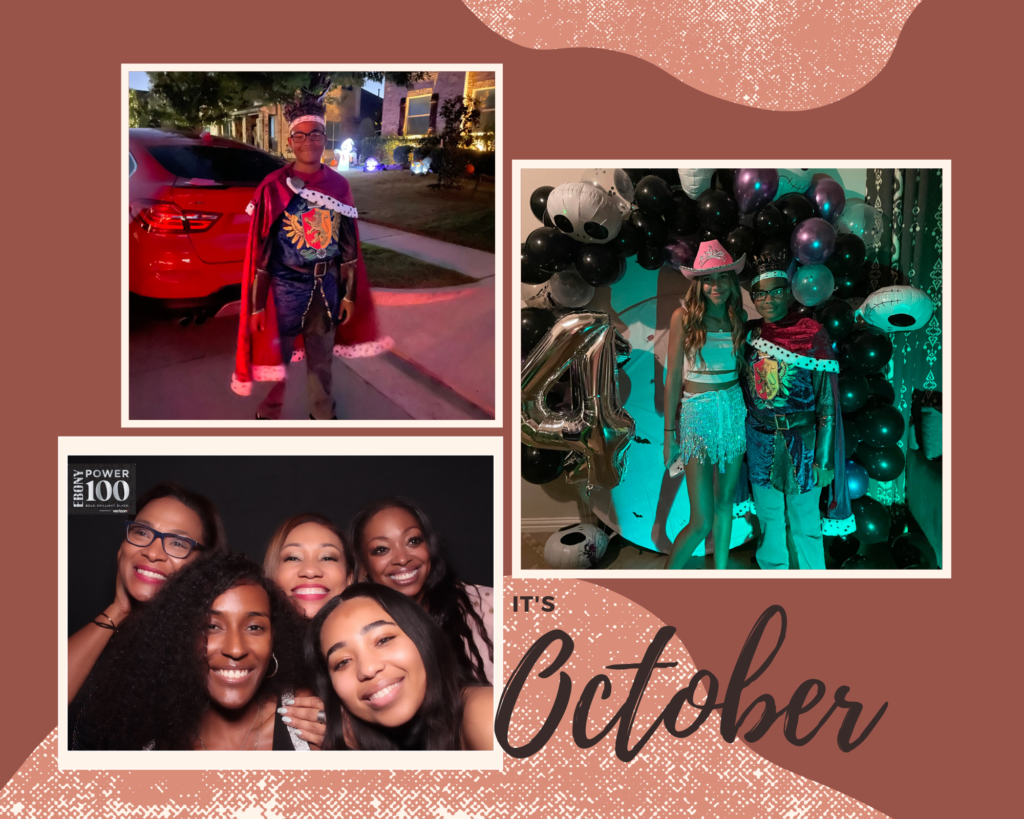 October was another busy month with projects. My son went to his first house party to celebrate my nieces birthday. I had the opportunity to work on ADCOLOR and Power 100. Both were a lot of work, but I did get to close the month working on Jesse Jackson’s 80th Birthday Celebration. 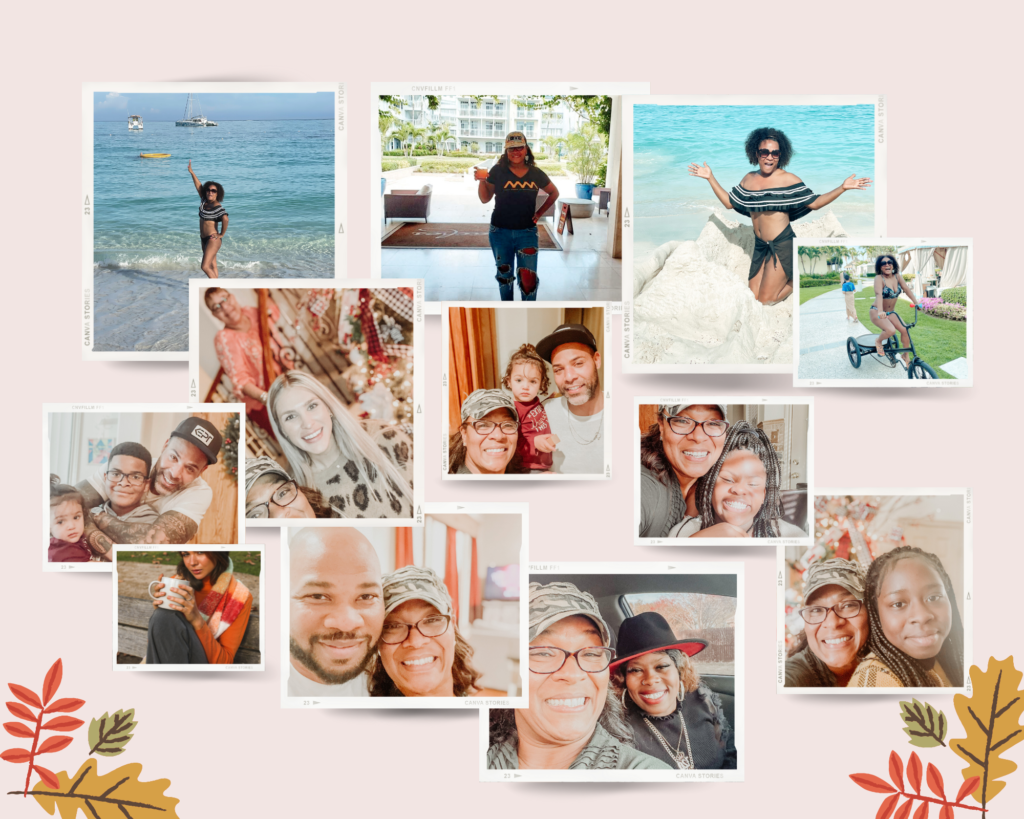 After all of that I needed a vacation. So I went to one of my favorite places, yup, I went to Beaches Turks snd Caicos. It was a great start to the month. The great start didn’t last long. I struggled with the death of my dad a year earlier and suddenly I was flooded with a lot of emotions…again. Yet, I pressed through and hosted Thanksgiving for my family. 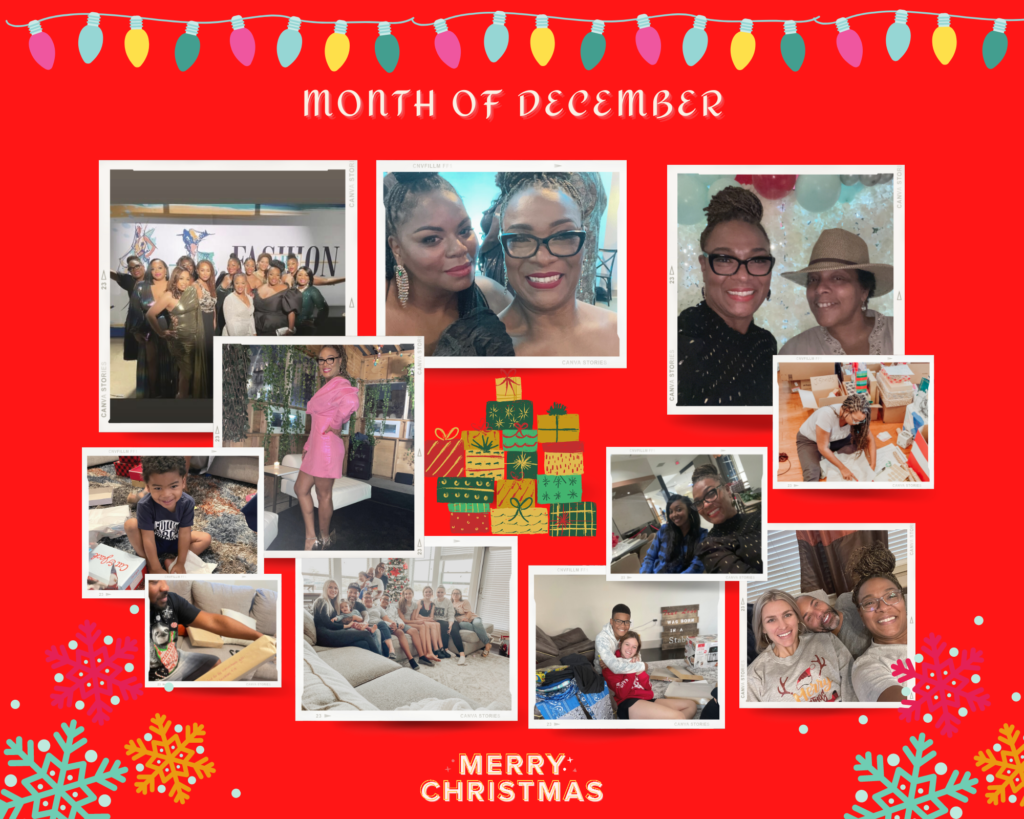 Now we reach December and boy did I get clarity on my life. I was invited to attend the Dallas Black Chambers Art of Fashion Gala with friends. I attended the CMG Holiday Party in NY. And I hosted the Motivated Mom Adopt a Mom Christmas Program Party. We served over 60 moms and more than 100 kids. It was a blessing, thanks to so many angels adopting them and providing gifts for their families.
Shortly after the party I started to feel purposeless. I was feeling like I needed clarity on my life’s purpose. That’s when I decided then that I was going to take all that these two years dished out and find meaning again. I ordered a few books and started to work on me.  My journey sparked a flame and gave me hope. After hosting Christmas for my family and close friend I immediately jumped back to my quest for a better version of myself.
Now I’m here, writing my year in review while counting down the last few hours, and looking forward to a more productive new year. This year proved to be a continuos therapy session, and as a result, I am in a great place of positive forward thinking. I don’t know what the new year will bring, but I do know that I don’t have to live it alone. With my amazing family, great group if friends, and the Holy Spirit leading the way… I will be just fine.
I’m thankful for my journey. I am expecting my 2022 year in review to be a beautiful story of abundance and peace. Its like Bob Goff said, “The next version of ME is the one who will pursue the ambitions all the previous versions were unable to accomplish.”  I hope that quote holds true for you as well.  My word for 2022 is Abundance, and I know that God will provide me with an overflowing year of abundance.  Happy New Year friends! Live an authentic life, conquer your fears, and create the life you are proud to live.